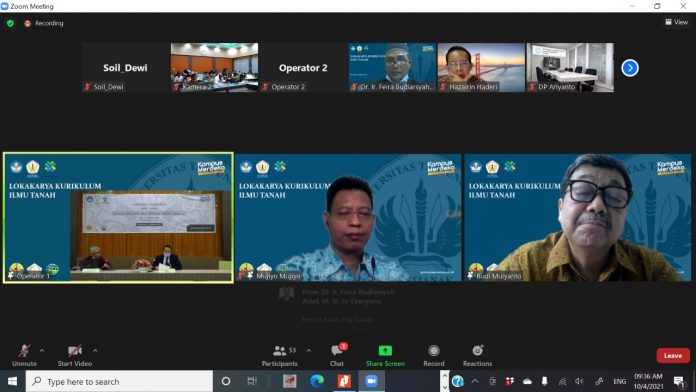 Monday, October 4th 2021, soil science study program of Tanjungpura University has held an event for preparing the curriculum at 08.30 – 12.30 WIB. This event has been held online via zoom meeting and offline at Tanjungpura University. The theme of the event are “Kurikulum Ilmu Tanah Selaras IPTEK dan Revolusi Industri 4.0” (Soil Science Curriculum in Harmony with Science Technology and the Industrial Revolution 4.0). This event has been attended by academic community of Faculty of Agriculture Tanjungpura University, Department of Agriculture and Plantation, National and Private agencies that engaged in plantation, forestry, and mining, etc. There were three speakers of this event, head of Indonesian Association of Soil Science, Prof. Dr. Ir. Budi Mulyanto, M.Sc., head of Indonesian Soil Science Study Program Association, Dr. Ir. Mujiyo, S.P., M.P., and head of the curriculum compiler for Soil Science Study Program Tanjungpura University, Dr. Ir. Tino Orciny Chandra, M.S.

There were also a discussion with the stakeholders about suggestions that can be considered for Soil Science study program, what supposed to be learned and known by the students that can be implemented when they directly involved in work. This event expected to make Soil Science study program able to face challenges that related to Industrial Revolution 4.0 and the development of science and technology year by year.